Differences Between Alpacas and Llamas 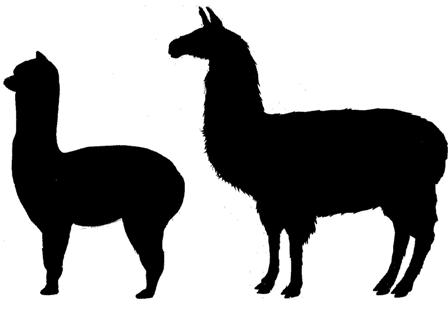 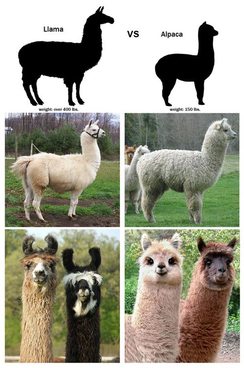 The Difference Between Alpacas and Llamas

The most easily detected difference between these two members of the camelid family is that while alpacas have shorter, “spear-shaped” ears, similar to a fox, Llamas have very long, “banana-shaped” ears.

There is also a significant difference in the size of these animals. However, to the untrained eye, this difference may not be so obvious unless you see them side by side. Llamas are almost twice the size of alpacas, averaging around 6 feet tall at the ears, whereas alpacas average about 5 feet. Further, while adult llamas generally weigh between 300 and 450 pounds, alpacas weigh in the range of 125 to 200 pounds.

Other notable differences occur in the body shape: Llamas have a much more flat and long back than alpacas, which makes them very good for carrying a pack. Llama’s tails are set right off the end of their backs, whereas alpaca tails are sloped down from their backs. In profile, the llama has a longer face, a very noble profile, where the alpaca’s nose is very short and compact, giving it a somewhat “cute” appearance.

Llamas generally don’t have a lot of hair on their faces, but alpacas generally have a “puffball” face, much like a dandelion’s head when gone to seed. The alpaca has a very fine, single coated fleece, which is much sought after by spinners, weavers, knitters and other fabric artisans. The llama, on the other hand, has a very coarse outer coat over a softer inner coat.

As far as personality goes, there is a difference of opinion between llama and alpaca farms/owners as to which of these wonderful animals have the best personality. Our experience at Serendipity Farm and that of other camelid farms that we know is that llamas are more independent and confident, making them easy to bond with. Whereas alpacas are more cautious, shy and timid. Alpacas are very much herd animals and like to be with their herdmates. Alpacas and Llamas also bond very well together at our farm where the Llamas act as the guardians of the alpaca herds.  Overall it is safe to say that both llamas and alpacas are very intelligent, easily trained, gentle and very curious.

An overview of Alpacas Vs Llamas: